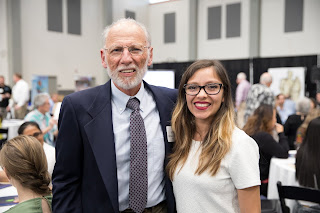 Hello, I am Perla, the recipient of this year's Annie R. Mitchell Scholarship.  I am beyond thankful for receiving this scholarship.  I am majoring education to be a 6th grade teacher, transferring to Fresno State in the fall.  I was inspired to be a teacher because when I was a Scicon counselor in high school, I loved working with the 6th graders.  Also, when I started in the Mini Corps Program through COS I knew the right path.  Through this program I was placed at a school and worked tutoring migrant students.  Just watching students grow and improve throughout the school year and knowing that the kids were able to reach their goals.﻿
Posted by Visalia Heritage, Inc. at 1:28 PM No comments: 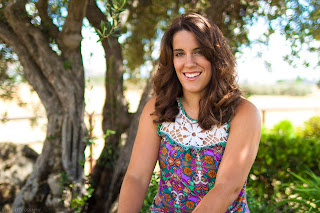 Paige Ainley, who graduated in June from COS, was awarded the Annie Mitchell Scholarship in the amount of $1,000.00.  She will be continuing her education at Fresno Pacific University, majoring in Social Science with a goal of being a secondary school teacher.  After finishing her teaching credential Paige will be looking for a position as a high school history teacher while coaching swimming and water polo.  Paige's goal is to gain some teaching experience and then begin working towards a master's degree.

To all members and supporters of Visalia Heritage, Inc:

In June the Visalia City Council voted its approval to grant permanent protection to the Visalia Homebuilder's Tract, bordered by Watson St, Conyer St, Noble Ave and the Mt Whitney HS campus. For more than 20 years Visalia Heritage worked with the city and homeowners to ensure that this area of near-pristine 1930’s-era homes is included in the Visalia Historic Preservation District. Many homes in this neighborhood were built by prominent Citizens. The late historian Annie Mitchell, herself a resident of “The Homebuilders’s” for nearly 50 years, recognized it as containing the largest intact collection of California Bungalow–style homes in the state. How gratifying it is to know it shall remain so for future generations!

The Fox Theatre has always been a vital fixture in out downtown area, and we are proud of the ongoing efforts of Friends of the Fox to fully restore this cinematic gem. In March, the theatre’s Board pledged to undertake the year-long task of having the theatre placed on the National Register of Historic Places. The Fox received a $3000 grant from Visalia Heritage to cover the cost of professional services needed to document the theatre's background. We have just received word that on February 8th, the Fox will be represented for nomination before the State Historic Resources Commission, and that this new status automatically affords a listing on the National Register as well as eligibility for future Federal grants.

Sales of our latest publication, Visalia:  A Pictorial History 1850s-1950s continue to be steady, thanks in no small part to the following local businesses where the books are displayed and sold: the Tulare County Museum, Tulare City Historical Museum, Valhalla Restaurant, Links Men’s & Women’s Wear, and The Book Garden (Exeter). Books may also be purchased through any Boardmember.  All proceeds benefit Visalia Heritage.


For over 20 years we have sponsored Mooney Groves Arbors 14 and 15. Due to their proximity to the playground and restrooms facilities, these arbors are almost constantly utilized, and, of course, require constant maintenance. In 2012 alone $1,448.91 was required for major roof repairs to both structures, which was underwritten in full by Visalia Heritage. We commend the staff of Tulare County Parks for quick completion of repairs. Our Arbors look better and more inviting than ever before!


In 1996, Visalia Heritage established the Annie Mitchell Scholarship to honor our friend and mentor on her 90th birthday, and we’re honored to give this award each year to a deserving COS graduate who is continuing on to a four-year University with an Education Major.


We've also presented a brass plaque to Habit Hamburger in appreciation of its financial support of Visalia Heritage during the restaurants Grand Opening Week. You must see that wonderfully restored drive-thru at night! Habit has proven an asset to Mooney Boulevard and our community! The food is great, too!


It is our goal to keep a watchful eye on the Preservation needs of our wonderful Visalia, the oldest city in the Central San Joaquin Valley! Visalia Heritage Inc. would not exist without you, our Membership.


Thank You so much for your continued support!

A four-block by two-and-a-half-block neighborhood just south of downtown Visalia that hearkens back to the 1920s and 1930s became a historic district Monday night at the City Council meeting.
And 35 houses were added to the local Register of Historic Structures.
The vote was 3-2 in favor of adding 107 properties to a total of 115 within the Visalia Home Builders Addition to the City of Visalia Historical District Map. Councilman Bob Link and Vice Mayor Steve Nelsen voted no.
And the vote was 5-0 to add 35 properties within the Visalia Home Builders Addition to the local Register of Historic Structures.
Link said he was afraid the historic designation would penalize the sale of properties within the Home Builders neighborhood while Nelsen said he believes in homeowners property rights.
Councilman Warren Gubler said he was in conflict with individual property rights and being a fan of historic preservation. He said he used to take his family on walks through the neighborhood.
"I'm going to vote with my heart on this one," he said.
Without the historic designation, houses could be replaced with duplexes and triplexes like other older neighborhoods in Visalia, said Councilman Greg Collins. "The more regulation you have, the more the neighborhood is protected," he said.
Seven members of the public spoke in favor of the two motions and two spoke against them. Dan Cloer who lives on Stevenson Street favored the motions.
"This is a neighborhood that can remain intact," he said.
Districts are a group of homes in a neighborhood. With the local register of historic structures, each one is added one structure at a time, said Andrew Chamberlain, senior planner for the city.
Bordered by Noble Avenue on the north, Mt. Whitney High School on the south, Conyer Street on the west and Watson Street on the east, the Visalia Home Builders Addition was the first housing project within the city of Visalia, said Nancy Loliva, public information officer for the city of Visalia.
Now, some exterior improvements on the 115 properties in the Home Builders neighborhood have to get approval from the Historic Preservation Advisory Committee, Chamberlain said.
"It's all about exterior changes, not interior," he said. "It's about sidings, windows and molding, not what color or if they can't do a building addition."
This neighborhood, consisting of 115 properties, was built by a group of businessmen who wanted to make Visalia a better place to live in the 1920s and 1930s, he said.
In other news, an ordinance was passed to regulate Visalia's growing massage therapy trade. It establishes health and safety provisions and background-check procedures to operate massage-related businesses in the city.
Posted by Visalia Heritage, Inc. at 10:36 AM 6 comments: 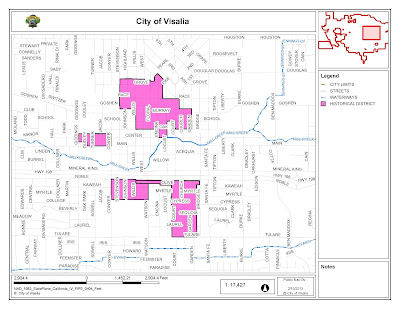 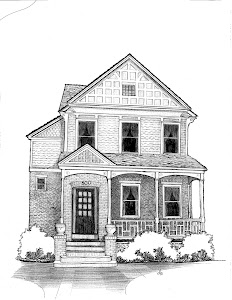